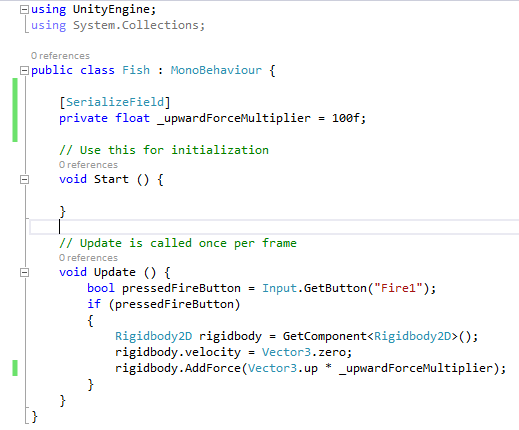 Code in Unity3D can be done in either C# or Javascript.  If you don’t have a preference, I’d recommend C# for your development.  It’s much more popular in the Unity3D community.  Most samples you find will be in C# only.  For this tutorial though, I’ll provide both the C# & Javascript versions.

If you’ve played Flappy Bird before, you know the bird flys to the right of your screen past a bunch of tubes.  Or at least that’s what it looks like.  In reality, the bird is just going up and down and the tubes are moving.  So for our game, all we need the fish to do is go up when we tap the screen (or click the mouse).

First we need to create a folder for our code.  In the root of the Project view, create a new folder named Code.

In the Code folder, right click and create a new C# script.

If you need to re-name a script, just select it and hit F2.

If you’re using Windows, I want you to switch your editor to Visual Studio now.  You can use MonoDevelop (the default editor), but the benefits of using Visual Studio make me HIGHLY recommend it.

Go to the External Tools section and set your External Script Editor to Visual Studio 2015.

Back to our Code (Mac & Windows)

You should be presented with a code file that looks like this.

In Unity3D, every Component on a GameObject must inherit from MonoBehavior.  If you don’t know what this means, don’t worry, you’ll pick it up.  What this means for us though is that our Fish script has some default functions we can hook into.  You can see two of these functions in your code now.

To move the fish, we’ll need to read the players Input.  Because this is such a common thing to do, there’s a very simple way to get it.

Now let’s look at the code and see what it’s doing, line by line.

Here, we’re creating a new variable named pressedFireButton.
It’s type is bool – A bool variable can be either true or false.

We’re assigning it a value from our Input system by calling the GetButton method.  The GetButton method takes one parameter which is the name of the button.  We’re passing in the button name “Fire1” and the function will return True if we’ve pressed one of the inputs mapped to it.

Fire1 is a default button in Unity3D that is mapped to many things [Space, Left-Ctrl, Left Click, A button (Xbox), X button (PS), etc].

Next we have some conditional code.  This line checks to see if the result of our input check was true.  If so, the code following it in braces {  } will be executed.

So if we have pressed the “Fire1” button (ex. tapped space), everything inside the braces will execute.  This will only happen ONCE per press.  You must release and re-press the button for the GetButton(“Fire1”) call to return true.

The first thing we do inside the braces, is get the RigidBody2D component.  This is the same component you added to the Fish earlier (when it started reacting to gravity).

The properties we care about are X, Y, & Z.  These are numeric values that represent a measurement on their corresponding axis.

We assign the RigidBody2D of our fish to the variable named “rigidbody”.

The “velocity” of our rigidbody is how fast it’s moving.  It’s measured in a Vector3, which is just a simple data structure containing 3 values (and a couple calculated properties we’ll worry about later).

On the next line, we set the velocity of our rigidbody to Vector3.zero.

Vector3.zero is just a shortcut to get a Vector3 with 0 for all 3 of it’s values.

This completely stops our rigidbody.  If it was falling, going up, or in any other direction, this line of code stops it.

So setting the velocity of our rigidbody to Vector3.zero is setting the rate of movement to 0 in all directions.

Next, we want to add some force and push our Fish upward.

AddForce does exactly what the name says.  It takes a single parameter, which is a Vector3.  We pass in Vector3.up, which is just another shortcut to get a Vector3 pointing in the default upward direction.  But before AddForce evaluates the Vector, we multiply it by 1000, so the resulting input is a Vector3 with the values [0, 1000, 0].

You may have already skipped ahead and tried it out.  If not, get in the editor, hit play and try out our input handling.  You should be able to click space, left-ctrl, or your mouse’s left-click.  Notice how the fish STOPS, then gets force added.  If we didn’t Stop the fish, you’d have to click very fast just to keep from falling.

You may have noticed that the amount of force we’re adding is too much.  Your fish is probably flying way off the top of the screen.  We have a couple ways we could address this problem.  The simplest is to just change that value of 1000 that we used earlier to something smaller.  Go ahead and try that now.  Make sure to SAVE the changed file or Unity3D won’t pick up your changes.

Another way to make these changes is to expose the multiplier we’re using in the Unity3D editor.  Specifically, we’ll exposed it on the Fish component of the Inspector.  To do this, we need to introduce a variable to our Fish class and add a special attribute to it so Unity3D knows we want to edit it.

Change your Fish.cs file to look like this.  Bold parts show the changes.

What we’ve done here is introduce “_upwardForceMultipler”.  We’ve set the default value to 100f.  The “f” on the end just signifies it’s a floating point value.

Most positional math in Unity3D and other game engines is done with floating point numbers.

Save the changes you’ve made here, then jump back to the editor.

You should now see an extra field in the Fish component that matches our variable name.  If you don’t see the component, hit Play, then Stop.  Playing forces a compile, which makes the engine update to your most changes.

Now we don’t have to change code to modify our force.  We can simply adjust the number in here until we get a value we’re happy with.  Go ahead and try it now.  Make sure you’re NOT in PLAY mode when making the changes though.

Changes done while you’re in Play mode do not save.  There are good reasons for this that we’ll cover later, but for now, just make sure you’re not playing when you make your changes (or they’ll be lost and you’ll have to do them again).

After a little trial and error, I ended up with 200 for my multiplier.  If you have a different # that’s okay, go with something that feels right to you.  You can always adjust this value later, and now that it’s in the Inspector, you can do it easily.

We’ll add some Seaweed, learn about Physics & Collisions, and even kill a fish.