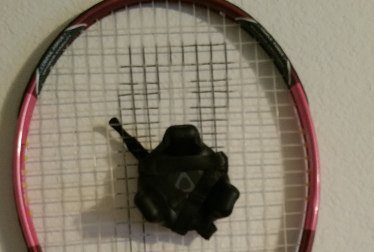 Friday, my Vive trackers finally arrived.  When I opened them, I wasn’t sure what to expect.. would they be cool, could I do something fun with them, or will they just sit on a shelf?  After just one day, I have the answer.. they’re Awesome!

So far, I’ve barely played with them, but I’ve already put them on my feet, stomped some civilians and kicked some buildings..

And now I’ve strapped one on to a tennis racket and dropped my wife onto a baseball field to smack tennis balls.

How do you use them?

Since they don’t really require any special code to work, I wanted to give a quick demo of how to make them work in Unity with the SteamVR plugin.

The default camera rig gives you a left and right controller, and works fine as a starting point for many VR projects.

To add trackers, create new children under the [CameraRig] with the context menu.

Once you create the objects, add a SteamVR_TrackedObject script to them.

Now select the [CameraRig] prefab and add the tracker(s) to the Objects array.

Turn on all the controllers & tracker(s).

I’ve noticed that the trackers don’t show up if both controllers aren’t on.  I haven’t yet dug into why, so if you already know, drop a comment at the bottom and share please 🙂

That’s it… they’ll just work and track from there.

One thing to note when you’re setting these trackers up is the position of the tracker on the object.

Unless you’re holding the tracker, it’s going to be offset a bit, and you need to take that into account when positioning things.

For example, with my tennis racket, the tracker is attached to the strings like this.

In-game, my tracker object has the racket as a child, and the object is lined up so that the rackets pivot under the tracker matches closely with where the tracker is placed on the actual racket.

I have to say I really love these things.  They’re pretty light, they track great just like the controllers, and for some reason I feel more comfortable attaching them to things.. (even though they’re almost the same price).

If you’re unsure about getting one, I’d say do it… they’re well worth the cost IMO even if you’re just playing around with them in the editor.

When it comes to in-game support, I think it’ll be a bit before they’re common, but I do expect to see games start adding capabilities over the next few months, I know I really want to put support in a few games myself.

In conclusion though, I’m excited to see what people come up with, and to experiment and make fun things..  If you happen to have some ideas, please share below or drop me an email.