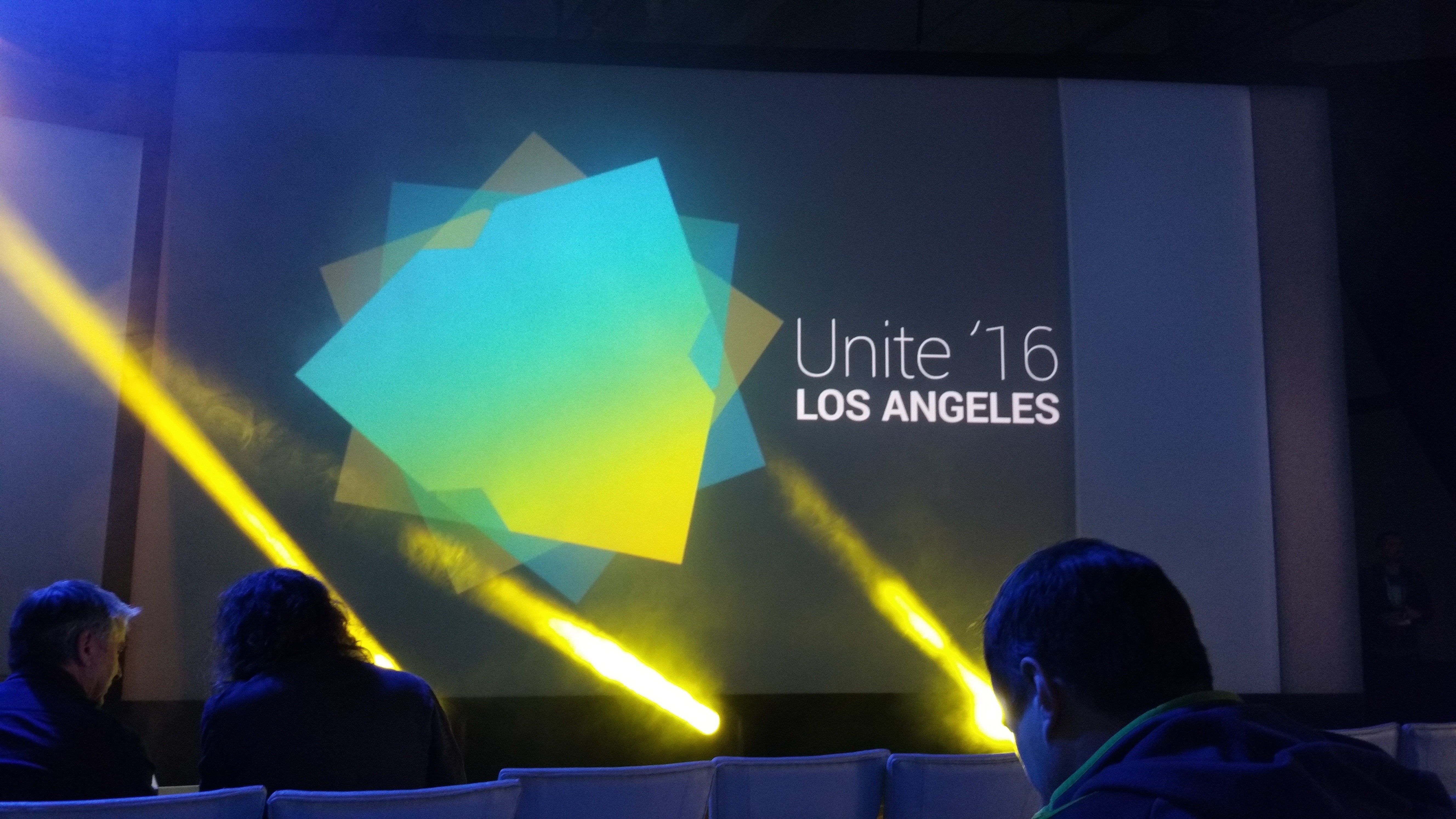 Unite LA just ended.  If you didn’t get to attend this year, you should definitely head to one of the upcoming Unite events soon!

It’s a great venue to learn more about Unity, interact with other Unity developers, and even talk to the Unity team.

The keynote was filled with a ton of exciting announcements.  Starting with this demo of 10k independent fish GameObjects swimming around at 60fps!

The Pantheon team was also there in force showing off the latest version of their exciting MMO running in Unity.

We also saw the announcement of the new Unity Video player.

The video player will replace the current hacky system and plugins, and allow high res videos to be shown in-game at high FPS.

It also supports 360 video, which I hope will be the new way to build 360 VR content in the future.

Not my picture – Which is why it looks so much better 🙂

The new navigation system that was discussed is amazing too.

And you can try it out here https://forum.unity3d.com/threads/welcome-new-navmesh-features-experimental-preview.438991/

I’ve tried it out a bit so since then and it really is great… I’m thrilled for this to become part of mainline Unity.

And it wrapped up with an introduction to the new Unity Connect platform, designed to help developers find projects and teams to find developers.

I’m excited to start using connect right away to find more talent for some of our upcoming game projects.

After the keynote, I was able to spend 3 days learning from speakers and attendees.

Tools, Tricks and Technologies for reaching stutter free 60 FPS in INSIDE

Their session was full of great actionable information and strategies for keeping a consistent 60fps.

If you haven’t played Inside yet, check it out and think about how you’d build a game with hours of seamless content scrolling by at 60fps on an XBox…

They have an entire strategy they’ve built and it’s amazing, I look forward to sharing some new tricks I learned from their session soon.

Some of these low level optimizations were a surprise

Overthrowing the MonoBehaviour Tyranny in a Glorious ScriptableObject Revolution (again)

Richard Fine did a great job in this talk demonstrating some great uses for ScriptableObjects.

If you’re not already using ScriptableObjects heavily, you should check out the video replay when it’s available and start following his advice!

The talk is actually available online here too! https://unity3d.com/learn/tutorials/topics/scripting/overthrowing-monobehaviour-tyranny-glorious-scriptableobject

The final session I attended was given by Chris Mortonson from Niantic Labs.

This talk was actually about dependency injection and how they use DI + Unit Tests to build and maintain a game like Pokemon GO.

It was very exciting to find out that Pokemon GO is actually using Zenject.  If you’re interested in using DI for your projects, I highly recommend trying Zenject out

The Cinematic Image Effects were another big hit at Unite.

From the talks, it sounds like the plan is to replace the standard assets effects with the new ones eventually.  I didn’t get to see the full talk, but I heard it was great, and the bit that was spoiled at the keynote looked worth digging into. (especially the bit about performance)

They’re available here to try out today: https://bitbucket.org/Unity-Technologies/cinematic-image-effects.  I plan on grabbing them soon and going deeper.

The best thing about events like Unite is getting to meet other developers.

I met hundreds, and had great conversations with quite a few of them.

I also got to ride on Jurassic Park with Stephan from TextMeshPro, which you may know is my favorite Unity asset!

And met some of the team from The Debug Log.

If you haven’t heard it yet, go check it out!

And this great pair from HyperLuminal who were demoing a really fun game when we weren’t dragging them onto the Transformers ride.

There are Unite events all over the world, and you may be asking yourself if you should attend one.

If you’re not sure, the answer is probably yes!

Even if you don’t like talking to people or traveling, you’ll gain a lot just from the sessions.  And if you’re open to it, you can make a bunch of great connections, find new jobs, or new employees, and just have a blast doing it.

If you do attend one soon, send me an email jason@unity3d.college or message me on twitter @unity3dcollege.

Static Events – How & Why to use them in Unity3D